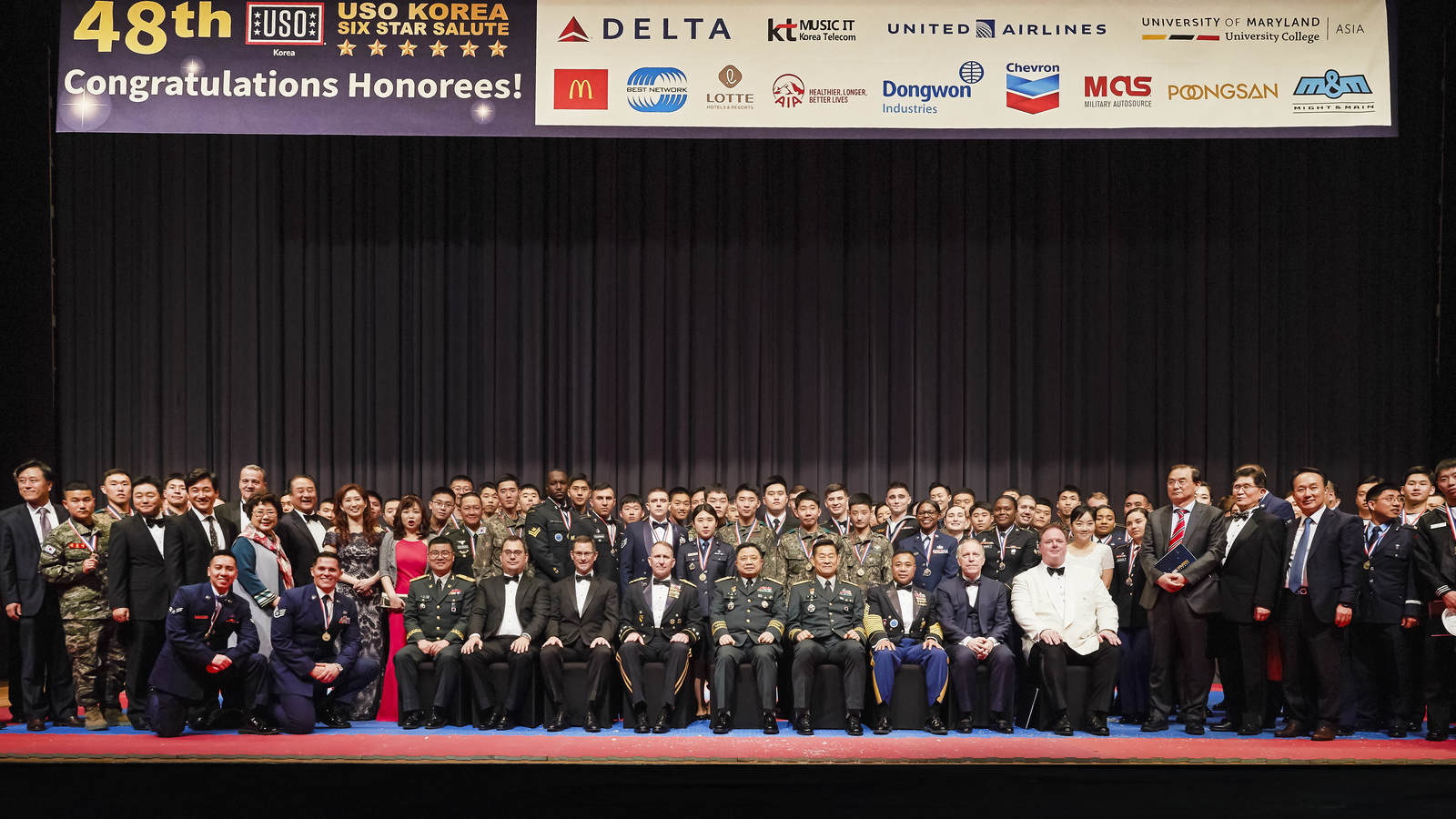 Nothing brings a broader smile and feeling of pride to a seasoned veteran than to observe the younger service members whom he or she has trained succeed, excel, and accept the mantle of leadership. It is a time-honored, hallowed military tradition of passing onto the up-and-coming generation that which we have learned over the years. These precise sentiments gripped CSM Donald Robertson on 18 April 2019 at the Grand Hyatt Seoul.

During the formal, black-tie gala, known as the USO Six Star Service Salute, the Garrison Command Sergeant Major of USAG Yongsan – Casey reminisced about his time at this same event twenty-two years earlier. Then, and now, USO Korea brings together high-ranking diplomatic, military, and business leaders to honor junior enlisted service members from the US, the ROK, and the United Nations Command.

Unit commanders across the Peninsula specially select the Honorees to attend this two-day program based on their accomplishments and demonstrated leadership potential. The program offers these emerging leaders a chance to enjoy what many of them define as a ‘once in a lifetime experience’ and ‘a memory they will never forget.’ It is designed to expose Honorees to cultural experiences, foster camaraderie among services and militaries, learn real-life leadership lessons from senior leaders, and most of all, to award them the honorary rank of “Six Star” in recognition of their distinguished service and their designation as ‘leaders of tomorrow.’

At the evening banquet, Honorees share a table with Ambassadors, General Officers, CEOs, business executives, and community leaders; during a solemn ceremony at the start of the Gala, these highest-ranking guests present a medallion to the Honorees at their respective table. Among the special guests who joined the event to recognize our 84 young military leaders this year were U.S. Ambassador Harry Harris, USFK/CFC/UNC Commander GEN Robert Abrams, Deputy UNC Commander GEN Choi, Byung-hyuk, and for the first time in the Six Star Salute history, the ROK Chairman of the Joint Chiefs of Staff, GEN Park Han-ki. The Chairman remarked “This event strengthens the ROK-US Alliance, and I will return next year!”

Behind the scenes, USO Korea Staff and Volunteers, together with an equally dedicated, selected group of business executives from American and Korean companies worked tirelessly to make it a phenomenal experience for our Honorees. USO Korea’s Annual Sponsors and members of the Advisory Council, headed by Advisory Council President Mr. Michael Quigley, promoted participation to the event by the broader business community, donated prizes, and ensured the entire endeavor was well worthy of the sixth star.

Today, just like in 1970, when the very first Six Star Salute was held in Korea, the USO offers a unique platform for the community to express their appreciation and get to know in person the men and women in uniform who make great sacrifices to keep the country safe and prosperous. Year after year, this tradition continues to impress memories that our Service Members will carry for years to come. CSM Donald Robertson brimmed with pride as he attended this year’s gala, and fondly recalled his experience as a Six Star Salute Honoree over 20 years ago:

“The USO Six Star Salute is an event that is above and beyond extraordinary. This event was by far one of the most memorable experiences in my 25 years of active duty service. Then—as a young NCO—SGT Donald Robertson was the 1st Brigade, Second Infantry Division, NCO of the Year winner in 1997. As the winner of the NCO of the Year competition, I was selected to attend the USO Six Star Salute event at the Grand Hyatt Hotel in Seoul. It was my first experience staying in such a luxurious hotel. The staff and members of the USO organization treated all of the Six Star Salute Honorees with the utmost dignity and respect. The USO team went above and beyond to ensure we enjoyed ourselves and the overall experience. As a Six Star Salute Honoree, we were able to experience traditional meals, visited historical sites, and witnessed cultural dances and music. The event culminated with a formal dinner at the Seoul Grand Hyatt Hotel Ballroom. The ballroom was beautifully decorated, and the food was delicious. All of the Six Star Salute Honorees were presented with medals and sat at tables with important leaders and sponsors of the Korean-American Alliance. It is events such as the USO Six Star Salute that truly magnify the strength of the US and ROK Alliance. This event is an experience in which Service Members, civilian and military leaders will enjoy, cherish and remember for many years to come.”

This program is USO Korea’s signature event of the year. More broadly, the USO mission remains unchanged throughout our 78-year history. As originally charged by President Franklin D. Roosevelt in 1941, the USO connects Service and Family Members to home, family, and country. Through a suite of wholesome programs and offerings at no charge to our patrons, we show them firsthand the thanks of a grateful nation and our Allies for their sacrifices and dedication. We love and honor our troops and their families every day in every USO center across the globe.

And for senior leaders, like CSM Robertson, events such as the Six Star Service Salute allows them to reflect upon their tremendous contributions of teaching, coaching, and mentoring these future leaders who are just now coming to the fore.

As we send off another outstanding group of Six Star Salute Alumni, we express our deepest gratitude to all those who support USO Korea to honor our brave service members and are the true Force Behind The Forces. Thank you for your support, until next year!